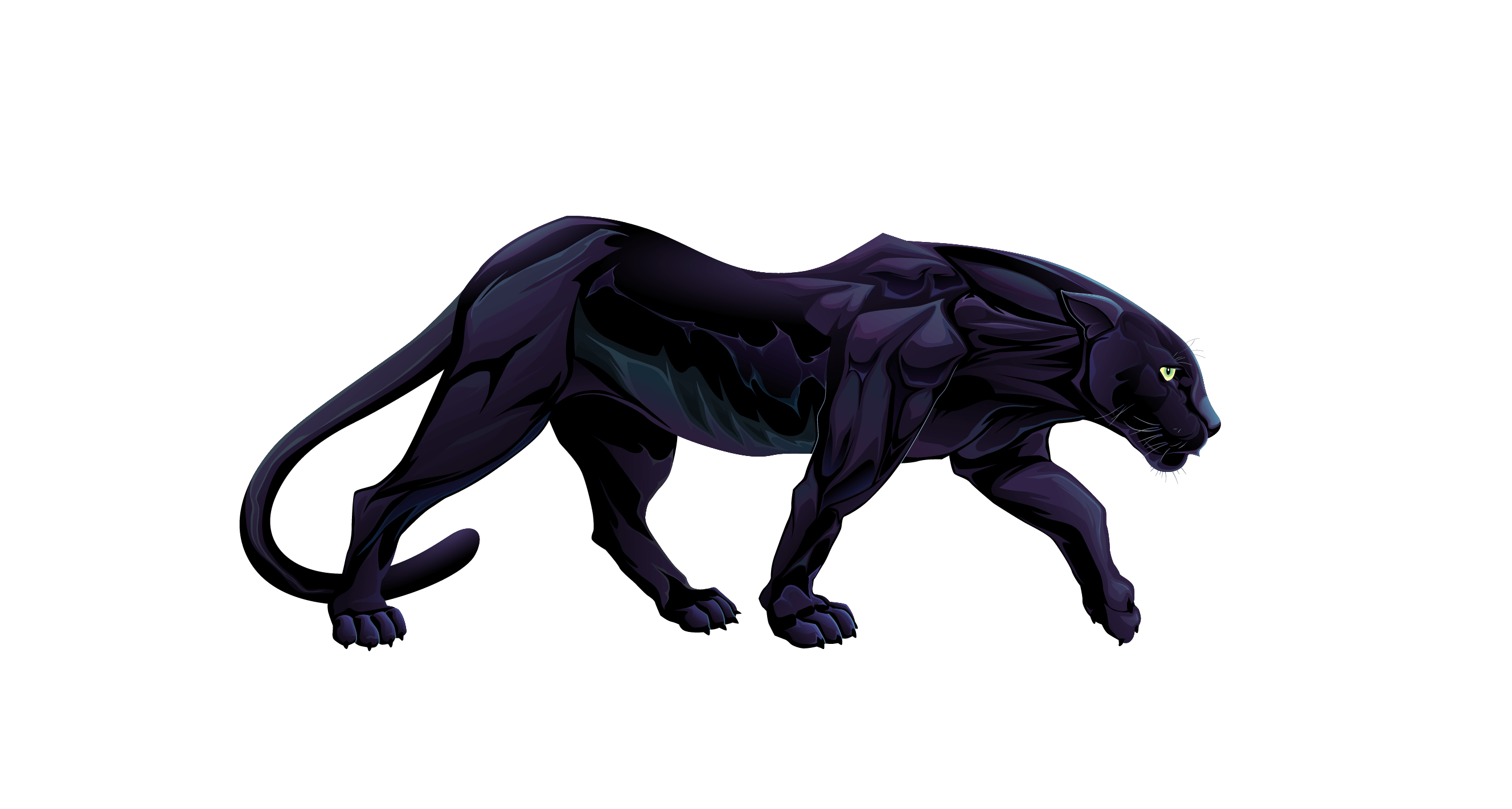 "Majesty is not really a state of being—it is the truth of all nature in motion." - RR, The Gene Keys

The Black Panther embodies a potent and impressive source of energy that empowers her toward individuation, displaying and celebrating her uniqueness in the world. Her power is natural, grounded and universally connected to all life. There is an inexhaustible reserve of inner strength deep in her physicality and heart. Her spine is strong and flexible. Her strength lies in movement, flow and receptivity, rather than in muscular power and force.

This majestic creature is constantly aware of everything that moves in the natural world around her. She has an inherent sense of survival that makes her the heroine of the dense tropical rainforest. She has an aura of self-assurance and effortlessness about her even when she hunts or climbs trees. The Black Panther experiences pure vital energy that emerges naturally out of response to external stimuli.

The Black Panther is often told to slow down, but she just has to be in movement to be in her true element. For her, it’s like a meditative state that allows her to access her vital life force energy. This archetype can easily drag anyone or anything toward the finishing line, but she has learned great discernment. There’s no point applying her precious life force to fruitless and unrewarding quests.

Though admired and desired, the Black Panther's energy is simply not available to others. This manifests as being unavailable because she is absorbed in following her own intuitive path and exploration in the now. In fact, she is independent and self-centered and doesn’t feel guilty about it. The Black Panther is about achieving on her own, and her individuality inspires others to self-empowerment.

Together with the Rebel (43) the Black Panther is a doorkeeper for the Codon Ring of Destiny. The Black Panther has transcended the fear of survival by bringing presence fully into every breath and moment. She is showing us the physical and kinesthetic intelligence of the body, where life simply moves through her.

In the Codon Ring of Destiny, the epiphanies of the higher planes meet the majesty of the body on the lower planes. This is how spirit enters matter and infuses it with divinity.  Our destiny may be governed by force and deafness or strength and insight. These two archetypes are showing us the latter. Has a deep inner strength and self-assuredness

Empowers and inspires others through her individuality

Has to learn to discern between force and strength

Can be unavailable through being self-absorbed BELLA EXPLAINS THE BLACK PANTHER AND WEAVES THE TEACHINGS FROM THE GENE KEYS AND HUMAN DESIGN.

"If this Siddhi dawns in a person, they do not communicate through words or language but through their actions and movements."

"Strength is the ability to act in harmony with natural forces." Discover the 34th Gene Key from its original source.

Victim of your Physicality

The Bane of Trying

“At low frequencies, all human beings are destructive to the collective.”

“If this Siddhi dawns in a person, they do not communicate through words or language but through their actions and movements.”

"When life is not interfered with in any way, it becomes highly fluid and efficient."

"In the Ring of Destiny, the epiphany of the higher planes encounters and infuses the majesty of the body on the lower planes. The result is pure fusion as spirit enters matter and imbues it with divinity."

Let the Black Panther teach you how to embody her gifts and wisdom.

Get your course for Archetype 34 now

"The awareness within the belly is beyond self-awareness because it is beyond the self. As such, it can be called pure awareness." The path of Majesty. Fold fingers, steeple the forefingers and rest the thumbs across each other. Left thumb over right is Yin: right thumb over left is Yang … alternate. Hi Ashley & Bella, when will the videos with Simone and Katreni be added? Thanks

Hi Hans, Simone and Bella will be live today for Soul Communication and tomorrow we will interview Katreni.